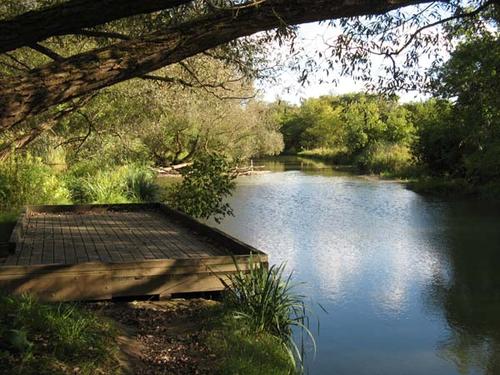 Markham Ontario is not really a suburb of Toronto—it is a city in its own right that lies across the top of Ontario’s largest city.  It is home to over a quarter million people as well as businesses like IBM, American Express, and Johnson & Johnson.  Settled by American Germans in 1792, it’s habitation by humans grew from the initial 64 families to a primarily Oriental population in its current makeup.  The area has evolved from native hunting grounds through agriculture and into tertiary industry.

Within Markham is the 305 acre Milne Dam Conservation Park.  The park is lush with vegetation and the Rouge River flows through it, providing fish plentiful enough to support both wildlife and sport fishing.  Nicholas Miller purchased the area from a Daniel Cozens who had received the land from the British Crown. The original 200 acres sold for 100 British pounds. Miller, one of the earliest recorded settlers in the area, had already been granted another lot upon his arrival in the Township in 1793, but chose to construct his saw and grist mill on the Rouge River site, largely because of the availability of water power.  The property changed hands several times before Peter and Alexander Milne purchased it in 1824. The mill was close to the present site of the Milne Dam and from this mill and its additional fulling mill, woollen mill, ashery and General Store, the town of Markham was born.

The mill was destroyed by fire in 1866. Peter’s grandsons, Grant and Archie, rebuilt the gristmill and operated the site until 1933. Near the turn of the 20th century, they produced a famous breakfast cereal call “Wheateen”.   In 1911, Archie built the first concrete and steel arc dam in Canada on this site. He believed this dam could generate the power for the village but the dam was washed out in 1929 and again in 1954 when Hurricane Hazel hit the area.

The park is nearly surrounded by single family homes, especially on its north and west sides.  Fingers of parkland separate cul-de-sacs in several places.  In one of these areas, a nightmare lurks.  In December 2001, with snow significant on the ground, a couple experienced something that to this day remains unexplained.  New to Canada, one of the witnesses assumed what they saw was a bear—it was dark, stood on two legs, and seemed quite tall.  What is now known as “The Markham Monster” was too thin to be a bear.  From the witness:

“ -it’s body was svelte–narrower than an ape would be across the shoulders and torso. It was solid as opposed to an apparition, and walked entirely upright with casual stride. If it was human it would be unusually large-at least 6.5 feet but probably closer to 7 or even more. It had a distinct neck area and was able to rotate it’s head toward us clearly. If it was clothed, the clothing was formfitting and not bulky.”

It uttered a deep growl that was more felt than heard.  Most significant was the intense fear felt, even in the safety of a car.  The couple quickly left.  Discovering through further research that bears were unlikely in that area, especially in midwinter, the couple returned several times to try to capture the creature on film with no success.  Four years later they encountered this thing in a similar location.  This time they were exploring a new housing development in the Stouffville Road area, considerably west and north of the Milne Dam.  The area shared some of the same qualities—a housing development bordering on a conservation area through which the Rouge River flows.  It is also technically in Markham, although in the Richmond Hill area.  This time, the thing rose up slightly in a snow drift and looked directly at the couple with red-orange eyes, possibly reflecting the car headlights.  Terrified, the couple left.

When researchers returned to the Stouffville area, the sensation of something present and the intense fear were still present.  The couple no longer explores these sorts of areas.  Theories abound, but the logical ones are that the creature, whatever it is, probably travels the Rouge Valley which is rich with plenty of sustenance for either an herbivore or a carnivore.  It does not hibernate, as it has been seen in the winter.  It is not intimidated by urbanization and it doesn’t shy away from interaction.  Several residents of the area have also reported something dark and upright that left them feeling terrified.

It doesn’t shy away from human interaction and it lives in their backyards;  The very definition of a monster.

Interestingly, an area of Florida that is boundaried by Markham Woods Road and Bridgewater Road (Bridgewater Rd is the Stouffville are where this was experienced) also lies adjacent to a conservation area.  Lake Mary, Florida is located in Seminole County, about 18 miles north of Orlando.  The area has had problems with cattle mutilations since 1996.  Do these areas have something more in common than the “coincidence” of location names?